LearnSocially: A Platform to Teach What You Know and Get Paid For It

It was a typical working day in 2015 when Andre Dantzler, the founder of SociallyU, contacted Nascenia. SociallyU is a software solution development firm focusing on online content delivery and communication which was launched in 2009. Andre emailed Nascenia when their developer left the team for an unavoidable reason and there was void in their team to complete the project. Fuad Omar, the COO of Nascenia, had a series of meetings with Andre to get the details. Unlike many clients, Andre was quite clear about what he wanted. He made a video for Nascenia with the demo of his product.

In case LearnSocially has not crossed your path yet, let us do the honor. LearnSocially, the flagship product of SociallyU, is a SAAS platform to create online learning environments. One can create online courses through the web interface to reach end users. From website hosting to payment processing, everything is managed within the platform. A client of this platform needs to create only teaching materials. Clients will start earning as soon as someone purchases those course materials. SociallyU has a studio of its own which clients can use to prepare their videos or tutorials.

LearnSocially is a SAAS platform built with Ruby on Rails, MySQL, HTML5, CSS3, JQuery, and Backbone

The initial vision was to create a platform that can support online teaching/learning and simultaneously incorporate different payment methods. Lots of products focus on social networking and many others on e-learning, but none combine the strengths of both and integrate a sophisticated subscription payment and ad campaign system in one seamless engine the way LearnSocially does.

Andre was not entirely optimistic about offshoring development work. Therefore he asked for a one month trial period. Nascenia assigned its developers to handle the issues and completed the trial period successfully. On an appropriate opportunity, CEO of Nascenia Shaer Hassan met Andre and his team at Chattanooga, Tennessee. Nascenia continues to work on the development of LearnSocially. 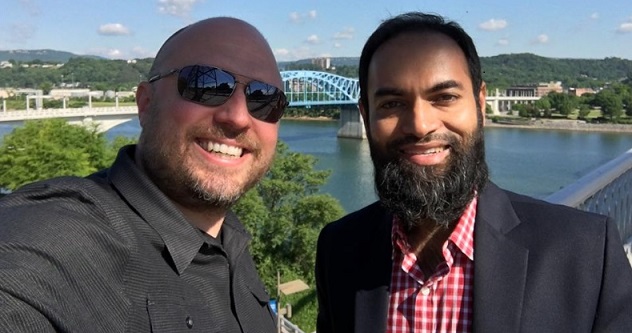 Shaer Hassan, the CEO of Nascenia with Andre Dantzler at Chattanooga, Tennessee

In the early period, one of the most challenging tasks that Nascenia helped to tackle was to “Upload videos directly to Amazon S3 from a browser without involving LearnSocially server. Then encode the videos to different formats on the fly through Zencoder.” One of the main features of LearnSocially is the tutorial videos. As people from different places with various internet speeds watch the videos, LearnSocially had to transcode the uploaded videos to 144p, 360p, and 1080p resolutions. It was previously done as stated below.

But LearnSocially faced two main problems. As lots of videos were being uploaded, it consumed lots of bandwidth, which was expensive. This is because bandwidth was consumed at the time of uploading the videos to LearnSocially server and also at the time of uploading the transcoded videos to Amazon S3. Besides, a third party named ‘Zencoder’ does the same thing more efficiently at lower cost. So they wanted to move to Zencoder.

After going through the problems, Nascenia was able to implement a solution which did not involve uploading videos to the LearnSocially server at all. At the same time, they implemented Zencoder which was more efficient and provided better quality. The solution involved the following steps – 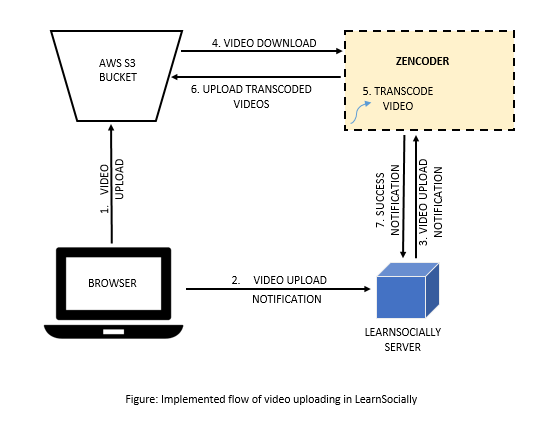 Some of the other challenges which Nascenia helped SociallyU with:

Through the new quiz section, the users of LearnSocially can prepare quizzes using fill in the blank, rearranging text, multiple choice, choosing the correct image, and multiple choice based on an image, video, or audio clip. Moreover, every question can now be customized to the admin user’s choice.

The whole project started as an outsourcing activity for Nascenia. As soon as Nascenia completed the initial responsibilities assigned they started working as a development partner. Since then one developer of SociallyU and one of Nascenia are working together full-time on LearnSocially. In the meantime, Nascenia assigned one additional developer for a certain time when work pressure was high. To build this SAAS platform Nascenia used Ruby on Rails, MySQL, HTML5, CSS3, JQuery, and Backbone.

Nascenia has worked before for several learning/teaching platforms like Khan Academy and School IT. Nonetheless, it has learned a lot from this collaboration.

A glimpse of Learnsocially - one of the products Nascenia built for it's client using Ruby on Rails | Nascenia
October 26, 2018 12:44 pm

[…] The development team of Nascenia has been developing it using Ruby on Rails technology focusing to the US market. Read the fascinating tale of building learnsocially from here. […]