Are you a leader or a boss?

A study among US adults showed that every one in two employees had left their job at some point in their career to get away from the manager and improve their overall life. Managers account for at least 70% of the difference in the scores of employee commitment.

One of the key factors of your company’s success is the quality of leadership exhibited to the employees. A boss can also be a leader but all of them are definitely not. So the question is, what turns a boss into a leader? Or, what are the factors that distinguish a leader from a boss?

There’s a distinction between being a leader and a boss. One manages their staff and the other inspires them to innovate, think creatively and strive for perfection. Every team has a boss by title but what they actually need is a leader. Although you may find similarities in the definition between a leader and a boss, the difference is much greater! The truly effective and inspiring leaders aren’t actually driven to lead people; they are to serve them. Let’s find out some key characteristics that differentiate leaders from bosses. 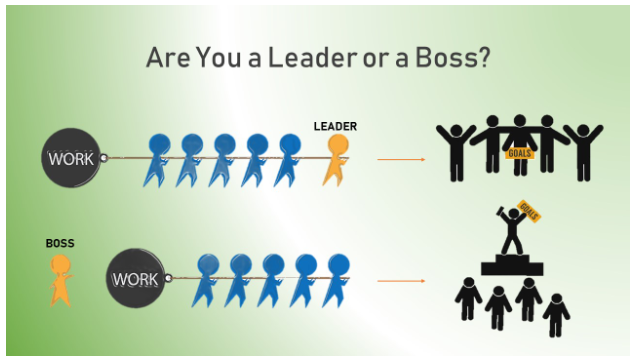 You tell bosses what they want to hear from you. That’s why bosses don’t need a strategy for conflict management – they only expect everyone to agree with them. Leaders create confidence and trust so you can tell them what they need to hear. A boss wants the job to be done. Whereas, a leader wants his/her people to be good at their jobs. This doesn’t mean doing their works for them; it means helping them to have the resources, information, and the support they need to perform at their natural best.

A LEADER WANTS YOU TO BE MORE SUCCESSFUL THAN THEY ARE. A BOSS ALWAYS WANTS TO BE THE BOSS.

This is a huge boss vs leader definer. A boss intends to remain your boss, always. A leader, similar to a parent, expects you to do better. A leader would proudly build you up to be a ‘leader’ and make your career progress plan a reality.  Positive leaders empower people to accomplish their goals.

A boss wants to teach you a lesson in every situation whereas a leader is always open to learning. Learning is indispensable from leadership.

“Leaders instill in their people a hope for success and a belief in themselves. Positive leaders empower people to accomplish their goals

A LEADER TRUSTS. A BOSS CONTROLS.

There is a tendency for a boss to control workers on what they do, how they do it. This attitude undermines the productivity and growth of employees. On the other hand,  a leader relies on them to complete their job in their own way and always be there to guide them, if needed.

A manager insists on competitive choices. Leaders remain aware of their rivalry but operate with a legacy concept in mind. This also encourages their subordinates to rake calculated risks and prepare themselves for the uncertain future.

One of the biggest discriminators of “boss vs leader” is the dependency on the authority. To have an impact, a boss depends on positional control. The influence of leadership is based on their influence, not based on power or position. In fact, some of the world’s most amazing leaders had no control over the people they influenced.

A boss will tell you what to do and by when to do it. A leader teaches you why you should do it and tries to guide you on how to do it. An emphasis on the ‘why’ is very crucial because it will ensure that your lessons are sustainable and transferrable to other situations.

After researching hundreds of leaders’ characteristics, we have been able to differentiate these characteristics of a leader in this never-ending “Leader vs Boss” debate. And, we found that he truly effective and inspiring leaders aren’t actually driven to lead people; they are driven to serve them.

So what are you? Are you a leader or just a boss?

Share
Tags: key traits of leaders, leader vs boss, major differences between a leader and a boss,