Android vs. iOS – A Comparison of the Platforms

According to a research, by 2020, an estimated 4bn people are expected to be connected to some form of internet device. Understandingly, this is why most businesses now have a website up and running. However, it is important to know which device they use to connect to the internet, as this can influence their engagement behaviour. From studies as recent as 2016, we see that over 90% of internet users own a smartphone. The rising importance of smartphones as an access point to the internet has caused new categories to emerge, such as Mobile-First, Mobile-Heavy, and even Mobile-Only internet users.

If we dive a little further, interestingly enough, apps are dominating the mobile browsing scenario. 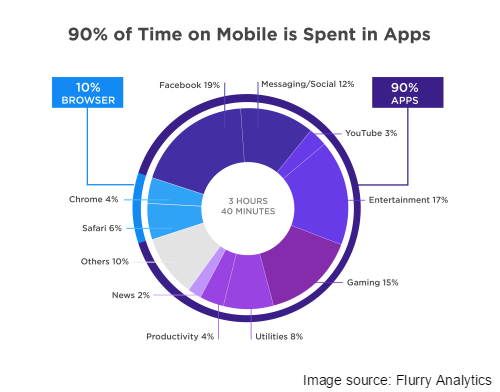 It becomes a no-brainer that you need mobile applications to reach your audience. Now, the question remains, which application platform will enable you to garner the highest audience reach? There are lots of mobile operating systems, but Google’s Android and Apple’s iOS dominate the market share. I have compared the two platforms and their relative advantages to create a guide as to which platform best supports your requirements.

TARGET CONSUMER OF THE APP

The use of Android devices is much more prominent in developing countries and low-middle income dominant areas. iOS devices are more commonly visible in corporate and higher income dominant states. This reflects the contrasting marketing strategies of the two giants. While Android’s goal is to dominate the market share (80% as opposed to iOS’s 15%), Apple is more focused on being premium, and, thus, has a much smaller customer base. The lifestyle demographics of the users can also be an indicator of which platform would be more suitable for your app. For example, a professional slide making app is likely to be more successful on iOS because corporates are more likely to use Apple mobile devices for work. A photo editing app is likely to be more successful on Android because iPhone cameras produce uniformly good images while Android cameras vary from device to device, which calls for editing.

Different types of app require different platforms. For example, gaming apps are much easier to launch on iOS as Apple devices have uniform screen sizes and resolutions. This is one of the reasons why most gaming apps are first launched on iOS before Android. A lot of mobile gamers have been shifting to iOS because it can be frustrating to wait for Android releases, although, according to gamers, Android gaming experience is often better than iOS ones. So iOS is quickly becoming the go to platform for reaching mobile gamers. If the app is related to productivity, or aimed towards gaining a higher reach, it makes more sense to launch it on Android first as it has a higher market share.

One of the main setbacks of developing an Android app is that it is a highly fragmented platform. It takes time to develop an app that is supported across most Android devices, given the differences in screen size, resolution, OS version, etc. 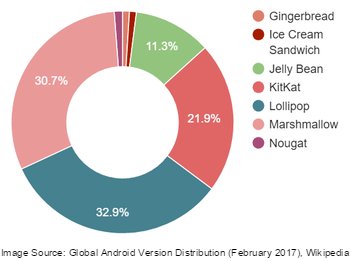 However, the Apple App Store takes a lot of time to approve an app, and the slightest error can result in rejection. For Google Play, the app submission process is much easier and results in faster deployment. Although Apple App Store has been around longer, Google Play Store now has 2.6 bn apps compared to Apple’s 2.2 bn. This shows a preference towards building Android apps despite the fragmentation.

According to App Annie, iOS apps generate about 75% more revenue than Android apps. However, to keep things in perspective, paid app downloads is much much less compared to free app downloads, as can be seen from the graph below. 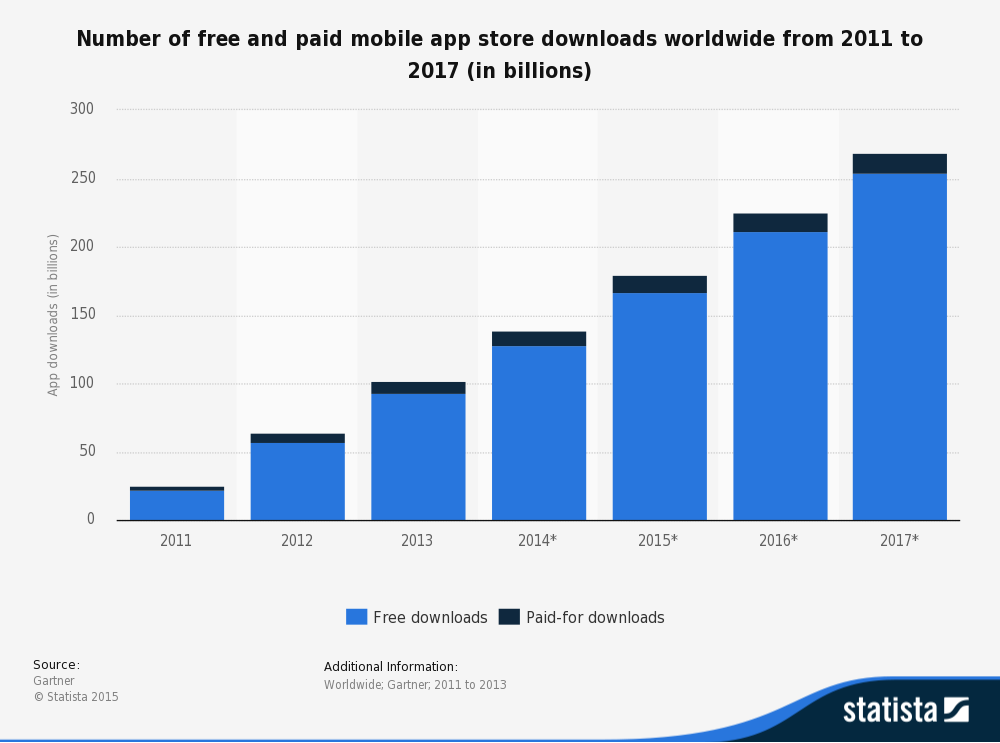 The reason behind the revenue gap is, simply put, a reflection of the income differences of its users. iOS users are more willing to pay for a good app, whereas Android users prefer free ones. This is why, most Android apps are ad supported.

Google Play Store is more open so as to make app deployment faster, which leaves loopholes in security, making it vulnerable to piracy. If the business is one that sells apps, iOS is a better option as it prioritizes copyright protections. Given that Apple users are five times more likely to make purchases, if the app is designed to make money, iOS is the better option. Again, demographics is also important in this case if the app would be more attractive to a certain type of lifestyle. For apps that require subscription, at some point the app must be available on both (maybe even more) platforms so that all users can subscribe irrespective of what device they use. However, it makes more sense to initially launch it on Android as it generally has the most users. For a start-up, it is advisable to develop an app for iOS first because of the revenue benefits, the possibility of creating a buzz amongst influencers, and to avoid the fragmented Android platform which can cause the app to be buggy on certain devices.

Generally, it is a common practice to develop an app for iOS first, and then to move on to the next platform when the iOS audience has matured to some extent (Instagram). Android apps are developed first if a majority of the target audience are Android users. Apps for both platforms are launched at the same time when the company has significant resources to be able to do so.

Whichever platform is prioritised first, the fact remains that at some point, apps have to be developed for both platforms in order to cater to your audience irrespective of what device they use.

If you can’t wait to have your app up and running, but are unsure as to where to start, here are some links to help you get started:

The first question when buying a mobile phone is usually: Android or iOS? Often a landmark decision for many years – and a question of faith. Today we show the Android vs iOS comparison and the strengths and weaknesses of both operating systems.